First off, I just want to say how thankful I am for everyone who has been following my 2 new fanart blogs on Tumblr! For those who still don’t know about these blogs, please do visit fuckyeahnezushi (a No.6 fanart sharing blog) and baabaastraysheep (a Catherine fanart sharing blog)! ❤

Those blogs are ran by me with some good friends and we would really appreciate it if you guys can check those out. 🙂

Anyway, onto some BL updates!

➜ Saw a couple gorgeous novel covers lately. One would be Hinomoto Umi’s “Sore ga Aida Suru Naraba” together with Ogura Muku as the illustrator; it will be released this August 10. Together with that is Tsukimura Kei’s collaboration with Kinoshita Keiko entitled “Bread Winner“.

➜ Mustuki Ran’s latest tankoubon, “Fuzoroi na Futari” will also be released on the 10th. Now about Mutsuki Ran, I really, REALLY want to try out her works! I see a couple of megane and she reminds me so much Hakutou Noriko in some point, lol. ;;

➜ Est Em’s “Happy End Apartment” will be released on the 12th. Quite excited about this even though I’m still trying to adapt to Est Em’s stories and art style.

➜ Inoue Satou’s “SMOKER” will be released on the 18th. Not really a fan of her art style although I heard her works are good. Might try reading this since the cover looks convincing in a very unexplainable reason– for me that is. ;;

➜ For fans of Moegi Yuu’s “Katekyo”, volume 3 will be finally released in tankoubon form this August 25th! onBLUE 3 will also be released on the same date.

➜ OPERA’s upcoming volume, “OPERA 28 KISS” will be released this August 25th — there will finally be a continuation on Tsuruta and Micchan’s story in Kusama Sakae’s “0 to 1 no Ma“. *w* I swear Kusama Sakae’s works are starting to grow on me. ;;

➜ Kikuya Kikuko’s “Himitsu Goto” will finally be released in tankoubon form! *u* I didn’t really get to follow this story that much since I only read a chapter from Canna’s volume 11. Although, I did like the story so I hope I won’t get disappointed if I get to read the tankoubon. It will be released this August 27th together with Sakurai Nanako’s “Dramatic Days“.

➜ So what I’m really excited about is Serihara Yuuki’s debut release. “Kimi Hitorijime” seems so adorable and I just can’t wait to get my hands on it! *w* now I just hope I won’t get disappointed. But I haven’t really encountered any seemingly cute stories that upset me before so I really have high hopes on this one, lol.

➜ Finally, I would just like to remind everyone about the Nakamura Asumiko fanbook that is going to be released next month — HOPEFULLY. 8(

So pre-order your copies now if you still haven’t!

As to what I shared on my Tumblr, I’ve been longing to get these titles for a very long time now especially Psyche Delico’s “Junai Ero Ki”. But what I was most excited about is Est Em’s “Equus”. Lol, I’ve been telling a certain open-minded friend about it and she was like, “Omg Hachi. First, gay sex. Now centaur sex. What’s next? Merman sex?”… is there really? orz; END_OF_DOCUMENT_TOKEN_TO_BE_REPLACED 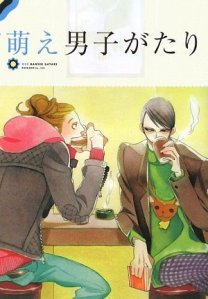 Aah. Sorry for not updating for a while. Been busy organizing my BL purchases for the next few months and I’m still trying to finish Persona 4, lol. But I am back with this short review – or preview for those who haven’t checked out this wonderful book yet.

So as I said in this post, I finally decided to do the review today since I got too lazy to do it in more earlier time. （￣□￣；）

Those are just some of the noted ones. There are a lot more interesting mangakas who contributed here so I suggest everyone to buy this wonderful book. （*´▽｀*）

END_OF_DOCUMENT_TOKEN_TO_BE_REPLACED

"Otaku to Fujoshi" is a blog dedicated to BL (boys love/yaoi) and anything else otakus may find interesting. Although 90% of this blog consists of BL reviews and releases, the author also posts non-BL entries from time-to-time.

Hachi「はち」. A helpless fujoshi who is unmistakably perverted in many ways. Other than BL she also loves reading GL, josei, seinen and shounen mangas. Also spends most of her time drawing or taking pictures and playing with her pets.

All of the scanned manga snippets and photos are by me. Please don't use without permission.